Urticaria, also known as hives, is an outbreak of swollen, pale red bumps or plaques (wheals) on the skin that appear suddenly - either as a result of the body's reaction to certain allergens, or for unknown reasons.

When an allergic reaction occurs, the body releases a protein called histamine. When histamine is released, the tiny blood vessels known as capillaries leak fluid. The fluid accumulates in the skin and causes a rash.Hives are a red, raised, itchy skin rash that is sometimes triggered by an allergen. An allergen is something that produces an allergic reaction.It is also known as urticaria, welts, weals, or nettle rash.

Hives (urticaria) are red, itchy welts that result from a skin reaction. The welts vary in size and appear and fade repeatedly as the reaction runs its course.The condition is considered chronic hives if the welts appear for more than six weeks and recur frequently over months or years. Often, the cause of chronic hives is not clear.Chronic hives can be very uncomfortable and interfere with sleep and daily activities.

Signs and symptoms of chronic hives include :

Urticaria occurs when the body reacts to an allergen and releases histamine and other chemicals from under the surface of the skin.

The histamine and chemicals cause inflammation and fluid to accumulate under the skin, causing wheals.

The welts that come with hives arise when certain cells release histamine and other chemicals into your bloodstream.

Examples of known triggers include : 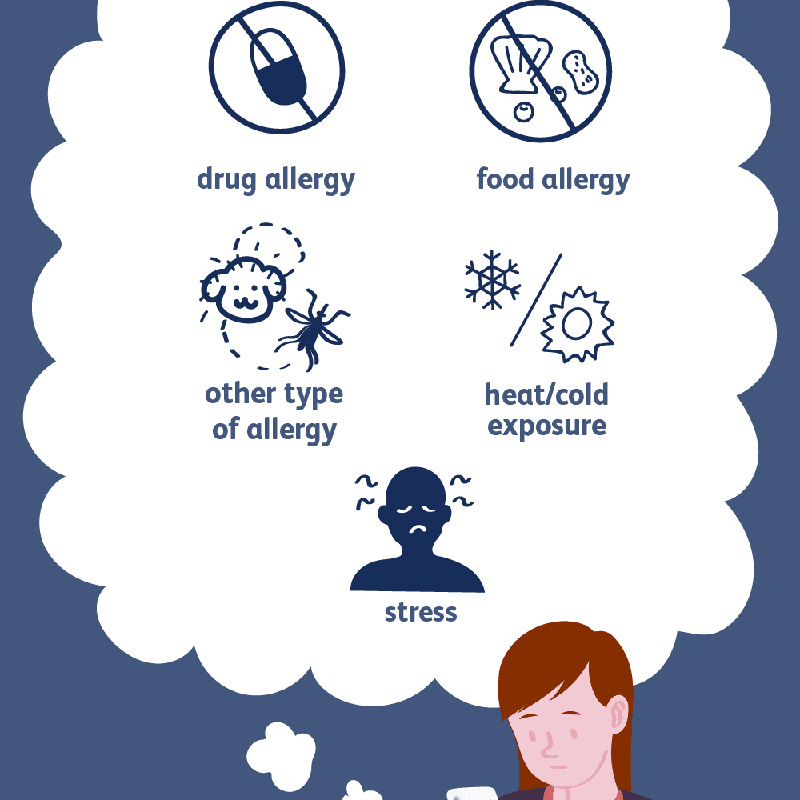 Doctor will do a physical exam and ask a number of questions to try to understand what might be causing signs and symptoms. He or she may also ask to keep a diary to keep track of :

If there physical exam and medical history suggest there hives are caused by an underlying problem, there doctor may have undergo testing, such as blood tests or skin tests.