Psoriasis is a chronic autoimmune condition that causes the rapid buildup of skin cells. This buildup of cells causes scaling on the skin’s surface.

Inflammation and redness around the scales is fairly common. Typical psoriatic scales are whitish-silver and develop in thick, red patches. Sometimes, these patches will crack and bleed.Psoriasis is the result of a sped-up skin production process. Typically, skin cells grow deep in the skin and slowly rise to the surface. Eventually, they fall off. The typical life cycle of a skin cell is one month. 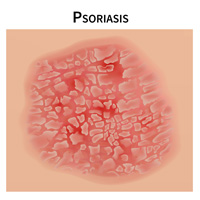 Scales typically develop on joints, such elbows and knees. They may develop anywhere on the body, including the :

There are five types of psoriasis: 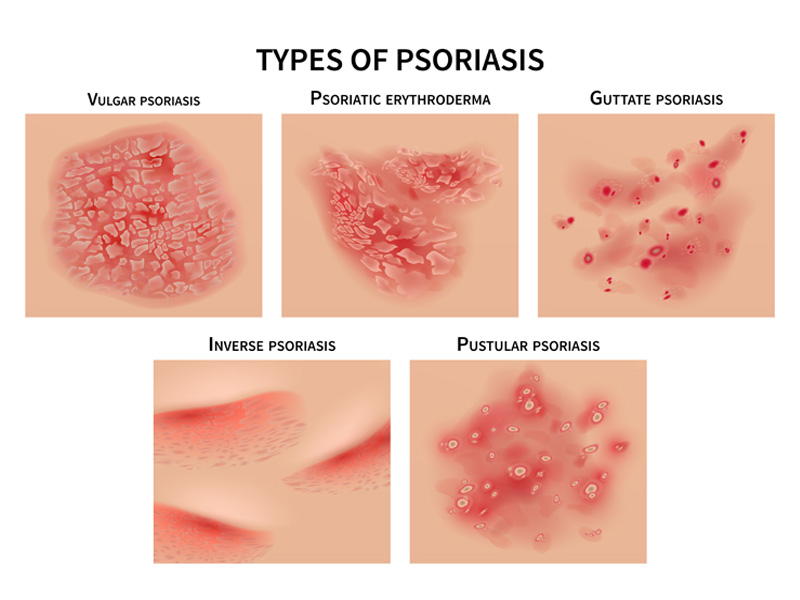 Psoriasis symptoms differ from person to person and depend on the type of psoriasis. Areas of psoriasis can be as small as a few flakes on the scalp or elbow, or cover the majority of the body.

Psoriasis patches can range from a few spots of dandruff-like scaling to major eruptions that cover large areas. The most commonly affected areas are the Lower back, Elbows, Knees, Legs, Soles of the feet, Scalp, Face and Palms.Most types of psoriasis go through cycles, flaring for a few weeks or months, then subsiding for a time or even going into remission.

No one knows the exact cause of psoriasis, but experts believe that it’s a combination of things. Something wrong with the immune system causes inflammation, triggering new skin cells to form too quickly. Normally, skin cells are replaced every 10 to 30 days. With psoriasis, new cells grow every 3 to 4 days. The buildup of old cells being replaced by new ones creates those silver scales.

Psoriasis tends to run in families, but it may be skip generations. For instance, a grandfather and his grandson may be affected, but not the child's mother.

Psoriasis is thought to be an immune system problem that causes the skin to regenerate at faster than normal rates. In the most common type of psoriasis, known as plaque psoriasis, this rapid turn over of cells results in scales and red patches.

Many people who are predisposed to psoriasis may be free of symptoms for years until the disease is triggered by some environmental factor. Common psoriasis triggers include : 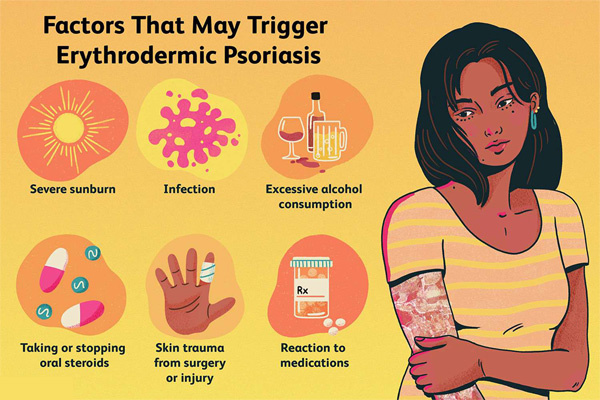 Two tests or examinations may be necessary to diagnose psoriasis.