With each menstrual cycle, the endometrium (uterine lining) prepares itself to nourish a fetus. If fertilization doesn’t occur, the body sheds the endometrium during the monthly (on average) cycle. In some cases, irregularity can occur in this cycle 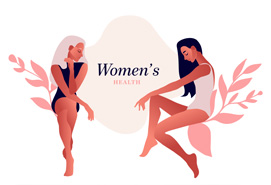 PMS is any unpleasant or uncomfortable symptom during cycle that may temporarily disturb normal functioning. These symptoms may last from a few hours to many days, and the types and intensity of symptoms can vary in individuals.

Premenstrual Dysphoric Disorder (PMDD) is a much more severe form of PMS which affects approximately 3 - 8 % of women of reproductive age. PMDD requires treatment by a physician. 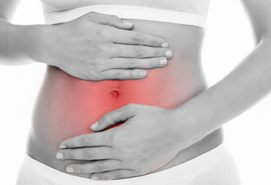 Although each individual may experience symptoms differently, the most common symptoms of PMS can include any of the following :

Simple modifications in lifestyle can help eliminate or reduce the severity of symptoms, including:

Amenorrhea is characterized by absent menstrual periods for more than three monthly menstrual cycles.There are two types of amenorrhea.

Amenorrhea can occur for a number of reasons as part of the normal course of life.

It may occur as a result of medications or a medical problem including :

If at least three consecutive menstrual periods are missed or if you've never had a menstrual period and are 16 years or older, it is important to see a healthcare professional. As with any condition, early diagnosis and treatment is very important.

The main sign of amenorrhea is the absence of menstrual periods.

Depending on the cause of amenorrhea, might experience other signs or symptoms along with the absence of periods, such as :

Dysmenorrhea is characterized by severe and frequent menstrual cramps and pain associated with menstruation.

The cause of dysmenorrhea is dependent on if the condition is primary or secondary.

Other possible causes may include:

Any woman can develop dysmenorrhea, but those who are at increased risk include :

The most common symptoms may include:

Delayed or suppressed menstrual flow accompanied by nausea or faintness suggests the use of this remedy. Getting too warm or being in a stuffy room make things worse. Cramping pain with a bearing-down feeling, either with scanty flow or thick, dark, clotted discharge, can also occur—symptoms that are changeable often point to Pulsatilla. The woman's moods are changeable as well, and a desire for attention and sympathy, along with a sensitive (even tearful) emotional state are typical. This remedy is indicated during many conditions involving hormonal changes and is often helpful to girls who have recently started having periods.

Indications for this remedy include painful, late, or suppressed menstruation, sometimes with a feeling that the pelvic floor is weak or as if the uterus is sagging. The woman may feel irritable, dragged out, and sad—losing interest temporarily in marital and family interactions, wanting to be left alone. Dampness, perspiring, and doing housework may aggravate the symptoms. Warmth and exercise, especially dancing, often brighten the woman's outlook and restore some energy.

Menstrual periods with a very heavy flow and cramping, along with feeling of exhaustion, chilliness, and even vomiting and diarrhea, are indications for this remedy. The periods may start too early and go on too long. Discomfort is often worse at night and also in wet, cold weather. Warm drinks, exercise, or moving the bowels may make things worse. Small meals, cold drinks, and wrapping up in warm clothes or covers will tend to bring relief.

Menorrhagia is the most common type of abnormal uterine bleeding and is characterized by heavy and prolonged menstrual bleeding.In some cases, bleeding may be so severe that daily activities are disrupted.Other types of this condition, also called dysfunctional uterine bleeding, may include :

There are several possible causes of menorrhagia, including:

Signs and symptoms of menorrhagia may include :

Menses too early and profuse; menstrual blood is almost black, comes in strings and with clots. It is an excellent remedy for neuralgic dysmenorrhoea; violent agonizing, grinding pain not ameliorated by anything; pain goes to thighs or radiate over whole body.