Chickenpox is a very contagious infection caused by the varicella-zoster virus.

It mainly affects kids, but adults can get it, too. The telltale sign of chickenpox is a super-itchy skin rash with red blisters. Over the course of several days, the blisters pop and start to leak. Then they crust and scab over before finally healing.

Symptoms appear within 10 to 21 days after you’ve been in contact with someone who has the virus.Most people recover in about 2 weeks.Chickenpox is generally mild, especially in children.But in severe cases, the blisters can spread to your nose, mouth, eyes, and even genitals.

An itchy rash is the most common symptom of chickenpox.

The infection will have to be in body for around 7 to 21 days before the rash and other symptoms develop. They start to be contagious to those around up to 48 hours before the skin rash starts to occur.

The non-rash symptoms may last a few days and include :

One or two days after experience these symptoms, the classic rash will begin to develop.

The rash goes through three phases before recover. These include :

The bumps on body will not all be in the same phase at the same time. New bumps will continuously appear throughout infection. The rash may be very itchy, especially before it scabs over with a crust.

They are still contagious until all the blisters on body have scabbed over. The crusty scabbed areas eventually fall off. It takes seven to 14 days to disappear completely.

COURSE OF THE SYMPTOMS WHEN THEY START TO APPEAR

The symptoms of a chickenpox infection appear around 7 to 21 days after exposure to the varicella-zoster virus.The early symptoms of chickenpox are vague and include a headache, tiredness, fever, appetite loss, nausea and body aches.

Varicella-zoster virus (VZV) causes the chickenpox infection. Most cases occur through contact with an infected person.The virus is contagious to those around you for one to two days before your blisters appear.VZV remains contagious until all blisters have crusted over.

The virus can spread through :

They spread very easily. They can get the virus by breathing in particles that come from chickenpox blisters or by touching something on which the particles landed.Chickenpox is most contagious from 1 to 2 days before the rash appears until all the blisters are dried and crusted.

Exposure to the virus through previous active infection or vaccination reduces risk. Immunity from the virus can be passed on from a mother to her newborn. Immunity lasts about three months from birth.

Anyone who has not been exposed may contract the virus.Risk increases under any of these conditions: 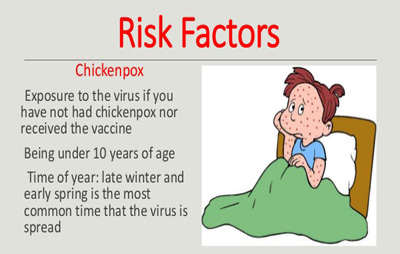 Chickenpox can lead to complications including

If a pregnant woman gets chickenpox, then certain complications may arise in the baby including :