A skin abscess happens when pus collects in hair follicles, skin tissues, or under the skin. A furuncle, also known as a boil, is a painful infection that forms around a hair follicle and contains pus.Aboilis askininfection that starts in ahairfollicle or oil gland. At first, the skin turns red in the area of the infection, and a tender lump develops. After four to seven days, the lump starts turning white as pus collects under the skin. 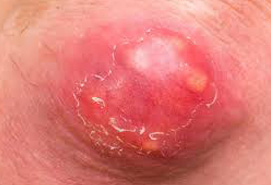 A carbuncle is collection of boils that develop under the skin. When bacteria infect hair follicles, the follicles can swell and turn into boils and carbuncles. A furuncle starts as a red lump. It may be tender. The lump rapidly fills with pus, and as it grows it may burst. Furuncles, boils, and carbuncles typically affect the thighs, armpits, buttocks, face, and neck.Individuals with weakened immune systems, adolescents, and young adults are more susceptible to furuncles than younger children or older adults.Furuncles and carbuncles are similar but with some differences.

Furuncles, or boils, are skin abscesses that result from staphylococcal infection. They affect a hair follicle and surrounding tissue.Carbuncles are groups of furuncles that join together under the skin. They affect the deeper layers, and they can lead to scarring.The most common places for boils to appear are on the face, neck, armpits, shoulders, and buttocks. When one forms on the eyelid, it is called asty If several boils appear in a group, this is a more serious type of infection called acarbuncle

Furuncles and carbuncles both result in swelling under the skin, and there may be other symptoms, too.

Most boils are caused by a germ (staphylococcal bacteria). This germ enters the body through tiny nicks or cuts in the skin or can travel down the hair to the follicle.

Although anyone — including otherwise healthy people — can develop boils or carbuncles, the following factors can increase your risk :

Rarely, bacteria from a boil or carbuncle can enter blood stream and travel to other parts of body. The spreading infection, commonly known as blood poisoning (sepsis), can lead to infections deep within body, such as heart (endocarditis) and bone (osteomyelitis).

It's not always possible to prevent boils, especially if you have a weakened immune system. But the following measures may help you avoid staph infections :

Doctor will likely be able to diagnose a boil or carbuncle simply by looking at it. A sample of the pus may be sent to the lab for testing. This may be useful if have recurring infections or an infection that hasn't responded to standard treatment.

Many varieties of the bacteria that cause boils have become resistant to certain types of antibiotics. So lab testing can help determine what type of antibiotic would work best in situation.